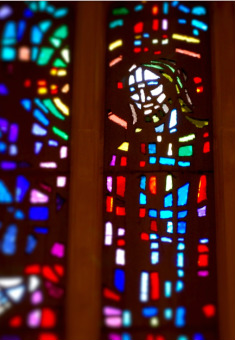 In 1950, members of First Methodist Church in downtown Monroe were aware that the population of the city was moving northward. Some members of that congregation were interested in establishing a church in that area and held an organizational meeting on Sunday, May 25, 1952. Officers were elected and the group decided on Northside Methodist church as the name. They requested the Louisiana Conference assign a minister and during the Annual Conference in June, 1952. Dr. Benjamin Ray Oliphint was appointed to serve the congregation.

Dr. Oliphint, with Nancy, his new wife of several days, moved to Monroe to begin an exciting tenure of thirteen years. A small, dedicated group attended the first service on June 15, 1952, at Georgia Tucker Elementary School on North 4th Street. During the hot summer months, church and Sunday school were sometimes held at Forsythe Park under the oak trees, complete with piano, choir, chairs and podium. The Chancel Choir was formed from the beginning with four members. With the completion of Lexington Elementary, the services moved there and the name was changed to St. Paul’s Methodist Church.

On September 13, 1953, fifteen months after formation of the church, the original building was complete including our current Contemporary Sanctuary. By the end of 1954, it was filled to capacity. Lexington Avenue was paved and additional land purchased to enlarge the growing church. In 1955-56, additional classrooms were added and in 1957, the Living Nativity scenes became a tradition that continues to today. In 1960, there was need for three worship services.

In June, 1965, Rev. Fred Flurry together with his wife Clarice came to St. Paul’s. (1965-1968) Under his direction our first pipe organ was installed and construction on our larger sanctuary begun (currently our Traditional Sanctuary). It was consecrated in 1969 under the direction of Rev. Clyde C. Frazier.

Our active youth ministry grew under the direction of Rev. James L. Stovall in the early to mid 1970s and our bell tower system was installed while Rev. Stone Caraway was pastor in the late 1970s.

Our Mother’s Day Out Program began under Rev. Donald J. Hall in 1979 and became another successful program for the church which continues today. Rev. Dwight Ramsey guided the direction of the Fellowship of Retired Men in the 1980s. During the 1980s and early 90s St. Paul’s sent regular mission teams to Kenya and helped build an eye clinic under Rev. Ramsey and later Dr. Odell Simmons. It was also while Dr. Simmons was here that St. Paul’s endorsed her first ministry candidate.

Under the direction of Dr. Warren Blakeman our 40th Anniversary Celebration was held and retirement of the mortgage was celebrated. We also outfitted an ambulance and shipped to Mozambique in conjunction with the African Mission Project. Our Mexico Missions and After School tutoring programs began under the leadership of Rev. Richard Humphries.

In 2001, New Song, our contemporary worship service began, led by our associate minister and the praise team. It continues as an important and meaningful worship opportunity. In 2005, Methodist Men’s To Do At the Zoo began, benefitting the Louisiana Methodist Children’s Home. In 2013 alone over $20,000 was raised at this event.

Rev. J. Roddy Taylor and his wife, Linda, came to serve our church from 2007-2012. During that time we joined our community Meals and Wheels program the Women’s Beach Retreat and two additional UMW circles began and a second member of St. Paul’s accepted God’s call into ordained ministry and was commissioned as a provisional deacon in 2014.

Dr. Tim Neustifter and wife, Linda Beth, came to us in July, 2012. He has helped us clarify our Vision and Mission Statements to lead us into the future.

(This history is taken primarily from the work of Robert E. Harrison and Carolyn Trawick.)

St. Paul's has become known for being a community church that lives in ministry with North Monroe. With active children's and youth ministries, as well as opportunities for adults at various stages of life, St. Paul's is often described as a great place for families of all ages and a community of care. We are striving to nurture one another in Christian Love through all that we do.